The analysis data is based on a nuclear magnetic resonance (NMR) spectroscopy, a technology commonly deployed in the field of medicine and chemistry to get information about the structural composition of molecules or tissue. The use of NMR in the field of fish oils was first investigated by SINTEF, one of Scandinavia’s largest R&D institutes. Through more than 20 years of research they discovered that the composition of the fat(oil) in the fish varied between species and between fish from the same species but from different origins. They also discovered that NMR could be used to detect these variations in the fat. They also found that the composition of the fat for a given species from one geographic is so uniform that it could be used as a unique fingerprint to identify this source.

In 2014 ORIVO acquired and commercialized this technology and has since then been collecting reference samples of marine species of commercial interest from fishing companies from all over the world. This, to establish a database that allows for accurate authenticity testing of commercial omega-3 supplements. The database, which contains over 10 000 samples, is a unique collection of fish oil samples on a global scale.

This technology is mainly used to test and confirm the authenticity of omega-3 products carrying the ORIVO seal of approval, guaranteeing the products´ origin to consumers. However, many of the samples we receive from our clients are also omega-3 supplements offered by their competitors where the origin claimed on the label is suspected to be untrue. In such cases. Regardless of the testing purpose, the methodology for testing of omega-3 supplements is very similar; we first perform a chemical analysis of the sample in the lab before we process the data in several steps. Here is a brief overview of how we do it:

We aliquot a sample of the product, dissolve it in a solvent and conduct an NMR analysis. This analysis results in a raw-data set consisting of about 130 000 unique data points. The raw data is then processed and analyzed by a set of powerful statistical algorithms that are trained specifically to recognize the unique patterns of the different classes of marine oils present in the ORIVO database.

As an additional step when testing of omega-3 supplements, to verify the classification made by the algorithm, a visual inspection is performed by a scientist trained within the field of NMR. The verification is done by visually comparing the analyzed sample with a reference spectrum of the expected species.

Based on the findings in the previous steps, a concluding report is made and provided to the client. If the sample is part of a certification program, the relevant omega-3 certificate is updated with data from the analyzed sample.

Examples from the krill oil market:

From time to time, ORIVO conducts analyses of omega-3 supplements suspected of fraud. To follow up the market screening we performed in 2021, we recently tested two krill oil products traded on TMALL in China.

In mentioned screening from 2021 we purchased and tested 19 omega-3 supplements of different origins, and the aim with this testing of two additional products was to get an indication of if the level of fraud that was revealed last year (45%) has improved. The selected products, both from recognized brands, were purchased on China´s leading online trading platform, TMALL.

Sadly, the results clearly show that the market still has challenges with adulteration. Both the two supplements that were tested were revealed as fraud. While they were both claiming to be composed of 100% krill oil, one of the samples were found to contain krill oil, but it was heavily diluted with vegetable oil. The other product did not contain krill oil at all, it was composed purely of vegetable oil.

To conclude, this analysis of two commercial krill oil supplements purchased in the Chinese market, shows that there is still adulterated product being traded. In other words, consumers still need to be aware of fake products, especially when buying supplements online.

But luckily, not all companies are bad. Some strive for transparency and authenticity, and thats why we enjoy testing of omega-3 supplements. When we compared the results of the two fraudulent products with a sample from NYO3 Krill Oil, an ORIVO certified krill oil supplement, it was clear that the latter one was the only product containing authentic krill oil from Antarctic waters. Look for the ORIVO logo next time you go shopping. 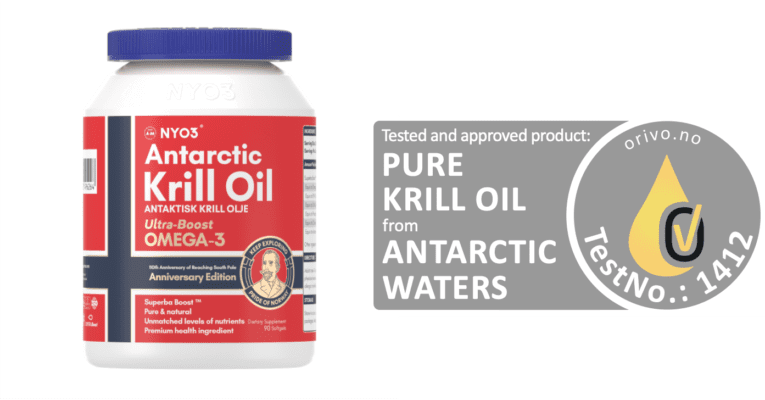 Categories
XWe use cookies on our website to give you the most relevant experience by remembering your preferences and repeat visits. By clicking “Accept”, you consent to the use of ALL the cookies. However you may visit Cookie Settings to provide a controlled consent. REJECTACCEPTCookie settings
Manage consent